Facetime, email and jet planes have made the world smaller for everyone, including the Orchestra. LACO will open the 2017-2018 season with four new principals. Notably, only oboist Claire Brazeau resides in Los Angeles County, while the remaining three hail from Copenhagen, New York and Colorado.

Executive Director Scott Harrison made no bones about the immediate roles he believes these new principals will occupy at the Orchestra. “Our new musicians are exceptional talents who bring artistic depth and an enthusiasm for community in equal doses.”

He and everyone else at the Orchestra have high expectations.

A passionate chamber musician, he performs in the New York Philharmonic Ensembles Concerts at Merkin Hall. In the field of jazz, Grossman was a member of the Marcus Roberts Trio and has performed with Wynton Marsalis, Lew Tabackin, Toshiko Akiyoshi and Donald Vega, among many others.

Grossman was introduced to LACO last fall while on sabbatical from the New York Philharmonic. “I was eager to play as a guest with LACO,” he explains, “but I wasn’t anticipating falling in love with such a fine ensemble.”

Dive into this clip of Grossman performing Softly as in a Morning Sunrise by Sigmund Romberg and Oscar Hammerstein II as part of the Philharmonic’s “Offstage at Barnes & Noble.”

Colorado based Thornton is currently Associate Professor of Horn at the University of Colorado at Boulder and the principal horn of the Colorado Symphony. As an orchestral musician, Thornton has worked with artists ranging from Yo-Yo Ma to Ian Anderson of Jethro Tull, and has performed, toured and recorded as a guest with the Philadelphia Orchestra, St. Paul Chamber Orchestra, KBS Symphony and Toronto Symphony, among others.

Thornton says, “I am thrilled to join this vibrant organization and look forward to many exciting performances in the future.”

Take delight in this taping of Poulenc’s Mouvements Perpétuels at the Colorado College Music Festival, where Thornton serves as a Faculty Artist each June. This transcription for 9 musicians includes Thornton’s warm and triumphant playing front and center. 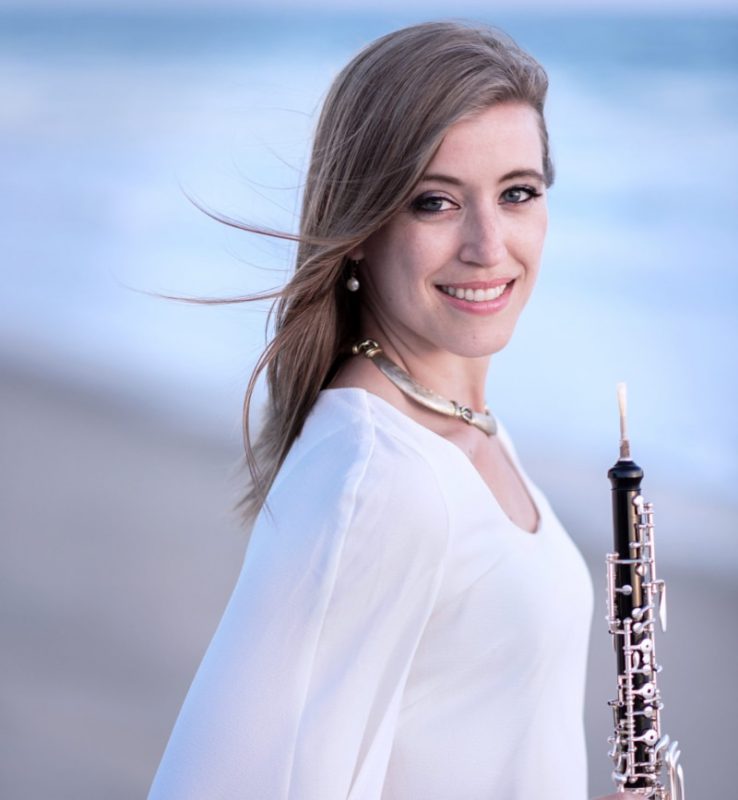 Brazeau’s appointment to principal oboe brings her full circle: the Glendale resident succeeds Allan Vogel, her mentor and professor at the Colburn School, who retired as LACO principal oboe in May after 44 years with the Orchestra.

Brazeau, praised as a “superb” oboist (Financial Times) is an advocate of both new and old music. She enjoys performing on baroque and classical period oboes and has played with such period instrument ensembles as Musica Angelica Baroque Orchestra and Ensemble Musica Humana. The Orchestra’s new principal is a co-founding member of cLAw, a new music woodwind quintet, as well as the newly-formed conductorless Kaleidoscope Chamber Orchestra.

Thomsen, a native of Denmark, is the youngest musician ever appointed to a LACO principal chair. He comes to Los Angeles after holding the Finnish Radio Symphony Orchestra’s principal flute position in Helsinki, Finland, where he performed under the baton of such conductors as James Gaffigan, Manfred Honeck, Louis Langrée, Hannu Lintu, Santtu-Matias Rouvali and Tugan Sokhiev.

Praised for his “golden sound” and “heartfelt musicianship,” Thomsen is the recipient of many of Denmark’s most prestigious music awards, including the Léonie Sonning Talent Prize; the Jacob Gade Honorary Award and Talent Prize; and the Rødovre Music Award