Big awards for creative people often come when artistic careers are peaking and fame is already set. Or awards come later than that, given in the glow of the long, laudatory sunset that often shines on brilliant minds for decades after their greatest works.
The timing didn’t work that way for Ellen Reid, a vibrant young voice in the world of composers and the newly named creative adviser for Los Angeles Chamber Orchestra. Her 2019 Pulitzer Prize in Music came at the perfect moment.
“I think she deserves every ounce of recognition she gets,” says fellow composer Missy Mazzoli, who was thrilled in April when Reid won the Pulitzer.

The award was given for Reid’s p r i s m, her first opera, which premiered in December 2018 at LA Opera. Members of the Pulitzer jury described the piece as a “bold new operatic work that uses sophisticated vocal writing and striking instrumental timbres to confront difficult subject matter: the effects of sexual and emotional abuse.”

These are heady days for Reid, a familiar name to LACO listeners after her stint as a guest composer in the 2017-18 season through the orchestra’s Sound Investment Program. The Pulitzer means worldwide recognition and a chance for p r i s m to get a lot more performances. She continues to devote time and energy to the Luna Composition Lab, a program for young women and gender non-conforming composers ages 13 to 19 that she co-founded with Mazzoli, which will have a West Coast pilot in May 2020 when Mazzoli is in-residence with LACO. She is busy writing new works — she takes a break from writing a commission for the New York Philharmonic to talk for a few minutes for this interview — that continue to blur the lines among orchestral music, opera and theater. 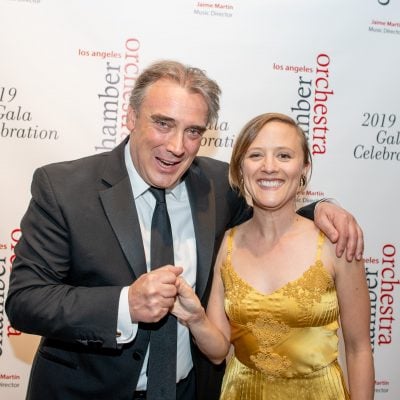 And she is excited about her new three-year-term as Creative Advisor + Composer-in-residence for LACO. Named to the position by incoming music director Jaime Martín, she will be offering her expertise to him and the rest of the orchestra’s creative team, particularly in the area of emerging American composers.

She is the orchestra’s second creative advisor, and, in accepting the job, she follows in the footsteps of her friend and fellow composer Andrew Norman. The position, she says, is one of those roles that you can make of it what you want. She won’t be actually programming concerts but instead giving advice and helping to mull through some of the bigger-picture issues that come with keeping LACO at the forefront of world-class contemporary classical music.

“I see it as a sounding board,” she says.

How important is the role to Martín? The creative advisor position is one of the first appointments he made after being named music director. He makes his home in London (where, before he got bitten by the conducting bug, he was principal flautist for the Academy of St. Martin in the Fields, the Royal Philharmonic Orchestra and the London Philharmonic Orchestra) and wanted to ensure an expert take on the American composer scene.

“One of the first things I really want to do, coming to a new city in a new country, is to get to know the composers,” Martín says. “Ellen is going to help me identify the well known and not-so-well known composers in the States. I think this is so exciting.”

“Ellen is going to help me identify the well known and not-so-well known composers in the States. I think this is so exciting.”
— Jaime Martín

With Reid — whose Petrichor was performed at LACO in 2018 — Martin and LACO will be privy to the insights of an accomplished artist who has definite opinions on the directions that contemporary classical music should go.

At the top of her list: How can LACO engage in a conversation with a really broad swath of talent that includes women and composers of color?
“I’m a woman in a male dominated field, and I know what it feels like to be programmed in the margins,” she says. “And I know what it’s like to feel that your career might be over if women composers go out of fashion.”

Mazzoli, whose Dark With Excessive Bright was performed Nov. 16-17 in a West Coast premiere by LACO, says the classical music world still has a long way to go.

“As much as I am heartened by an increase in opportunities and awareness of work created by women, I am also shocked by still massive problems when it comes to gender and racial equality in the field,” she says.

“As much as I am heartened by an increase in opportunities and awareness of work created by women, I am also shocked by still massive problems when it comes to gender and racial equality in the field.”

This passion for diversity and inclusion is one reason that Reid and Mazzoli founded the Luna Composition Lab three years ago. It’s the only program of its kind in the U.S. Young composers are paired with experienced musicians, and Skype sessions bring the participants together across the country. The atmosphere is about encouragement. LACO is set to spearhead a West Coast pilot of Luna Lab in May.

“Ellen is positivity embodied,” Mazzoli says. “That is such a valuable asset in this field.”

The idea of community and feeling connected to older composers is essential.

“We think that mentorship is a really important part of shifting the pipeline of new music in the U.S.,” Reid says.

Her own story, interestingly enough, does not include early-career mentoring. She didn’t start writing music until she was in college when a professor suggested her talents lay in that direction. She didn’t meet another female composer until she was 26.

That shouldn’t be a surprise, however. Reid has always been a trailblazer, Mazzoli says.

“Ellen is a truly unique voice in our community. Of all my composer peers, she has this really diverse well of influences she’s drawing from. And she works so hard.”

One detail of note for Reid is that she became the first composer to have works premiered by Los Angeles’ four leading musical institutions — the Los Angeles Philharmonic, LA Opera, LACO and Los Angeles Master Chorale — all within one year.

As her work with LACO continues, Reid hopes to have conversations with audience members about the role of new work and experimentation in coming orchestral programs.

She knows that some people are more open to such work than others. But she points out that some of the most beloved works in the classical canon today, such as Stravinsky’s The Rite of Spring, were incredibly divisive when they premiered and were at the time considered failures. That’s when education can come in. Introducing audiences to a new piece and offering context and backstory can have a big impact on its reception.

“I want to start from a place that is saying, ‘You know, we might not agree,’ “ she says.

As someone with a coveted Pulitzer Prize, Reid now brings to the table a certain gravitas when she’s discussing such issues.

For Martín, the selection of Reid was a natural. And he’s particularly happy with the timing. LACO offered her the job of creative adviser just a few weeks before she won the Pulitzer.

That’s what you call a good hire.

Donald Munro has a three-decade career in journalism, including 25 years as an arts writer and critic at the Fresno Bee. He covers arts in the central San Joaquin Valley at munroreview.com, his non-profit website.